The developer behind one of the UK’s largest regeneration sites, The Island Quarter in Nottingham, has revealed how the masterplan and placemaking have been radically modified to meet the demands of a post-Covid world.

The design teams behind The Island Quarter in Nottingham have revealed how previous plans have been fundamentally altered to create places where people want to live, work and spend time – incorporating elements that people really want in a world recovering from the global pandemic.

To meet the demands of the Nottingham’s local communities in the wake of the Covid-19 pandemic, international architecture firm Leonard Design Architects (LDA) and placemaking specialists Studio Egret West have explained their updated plans for the 36-acre site – which include enhanced green spaces and multi-functional public areas for outdoor events.

David Leonard of LDA said: “The plans for The Island Quarter have been adapted to create inclusive, healthy, sustainable and viable communities, which also meet the changing attitudes towards flexible working and health and wellbeing in the wake of the Covid-19 pandemic.

“These latest changes include an expansion of the linear park, which will now extend around the site to create active, liveable and safe spaces linking the new community at The Island Quarter with the area’s existing vibrant communities.”

As well as significantly increasing the amount of green space on the 36-acre site, the placemaking plan creates an extended network of community areas and access routes for pedestrians and cyclists, further linking Sneinton and the east of the site with the city centre to the north and west.

The Conygar Investment Company plc, the developer behind the scheme, has consulted locally since it purchased the site to find out people’s views. Over the coming weeks and months, it will continue to reach out to communities and local businesses to help form its vision for the site.

Speaking at an event this week (Monday), where a new masterplan was unveiled for the first time, David Leonard and David West, of Studio Egret West, showed exciting new placemaking ideas – and talked of their passion to create stunning green spaces.

Leonard said: “The Island Quarter is a hugely important site in Nottingham. It is bespoke to the city and the area of Nottingham where it lies. It is anchored on the city’s canal, which has become a beating heart of Nottingham over the past year – with people taking to the water during the pandemic to enjoy water sports such as paddle boarding, rowing and canoeing.

“Relooking at the masterplan as a result of Covid, we were seeing our work patterns changing our living patterns changing, and a real desire for open space and greenery. These were the big motivators for having another fundamental look at the plan.

“As a Nottingham headquartered international architecture practice, we have a vested interest in the success of this site, and our new masterplan will ensure that The Island Quarter is a destination where people want to spend their time.”

David West, founding partner at Studio Egret West, said: “We want The Island Quarter to be very distinctive. The aim is that it is complementary to the other Nottingham quarters and yet differentiated and contrasting. With that kind of overarching island theme, there is a huge amount we can do with the landscape of the nature to live.

“To get people back to wanting to live and work in cities, we need to significantly inject nature into the heart of those environments. This has released us to be even more passionate and driven to create environments like The Island Quarter.” 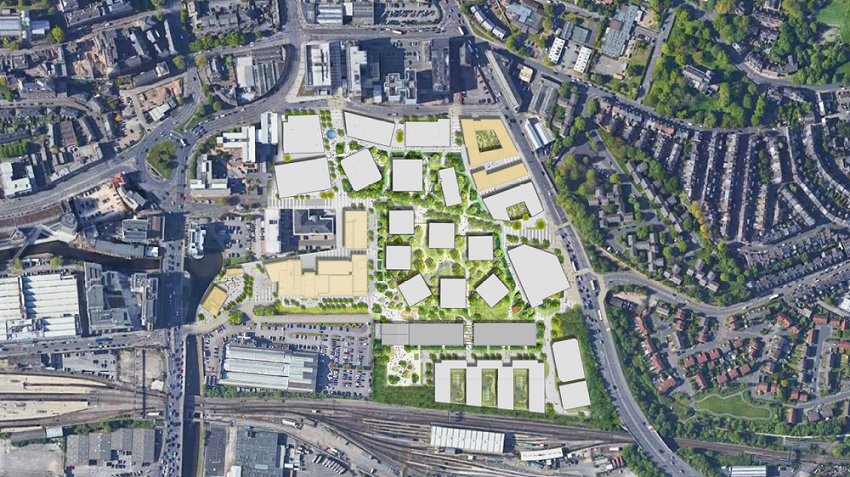 The new masterplan contains more than 10,000sqm of urban river and green space, more than 20 restaurants, bars and cafés – including Canal Turn, which sits at the heart of phase 1A – and will boast 1,600 new homes and allow for more than 6,000 office jobs.

With phase 1A well underway, other upcoming phases will include different typologies of housing from family homes to apartments, and homes for sale and for rent. There will be a huge leisure mix as well as a range of office space – thus allowing people who live on site to work there too, enjoying the ’15-minute city’ concept.

West said: “At The Island Quarter, we are setting the scene for something really different. Phase 1 delivers a whole new square next to the canal and we have the starting point of a linear park, which will create a different setting. We have talked about an ‘urban river’ at the heart of this place that creates a softness and, when you visit the site, greets you with something verdant. As you arrive on site, you will see green and when you leave you will see green – and this will give The Island Quarter that real sense of differentiation.”

Christopher Ware, property director at Conygar, said: “We want The Island Quarter to be an exemplar development and one that really sets a standard not just for the Midlands, but for the rest of the UK and beyond.

“We have consulted with local communities on what they want to see from The Island Quarter and we will continue to do this over the coming weeks and months – to ensure that we are constantly listening to what communities and local businesses have to say.”

“Leonard Design has a proven track record of masterplanning on schemes of a similar size across the globe and, as a Nottingham company, has a real connection with the site and its potential to revitalise the city’s Southside.

“Alongside that, the placemaking expertise from Studio Egret West will be crucial in creating engaging public realm on the site and creating a destination that people can live work and play.”

The practices join the team of architects working on the wider plans for The Island Quarter, including Canal Turn and Phase 1B designer Jestico+Whiles, delivery architect CPMG and DAY, which is working on the proposed student accommodation element of the scheme.

The audience was given a tour of Canal Turn – the first phase of the site, which is due for completion in early 2022.

For more information on The Island Quarter, visit theislandquarter.com.

For more information from the Leonard Design team head to our Contact Us page or email us at office@leonard.design