Architects from the award-winning practice, which is headquartered in Nottingham but has a global reach, were brought on board by Carlton Street Trading as part of the wider regeneration of the area to provide design concepts that is in keeping with the heritage of the buildings. 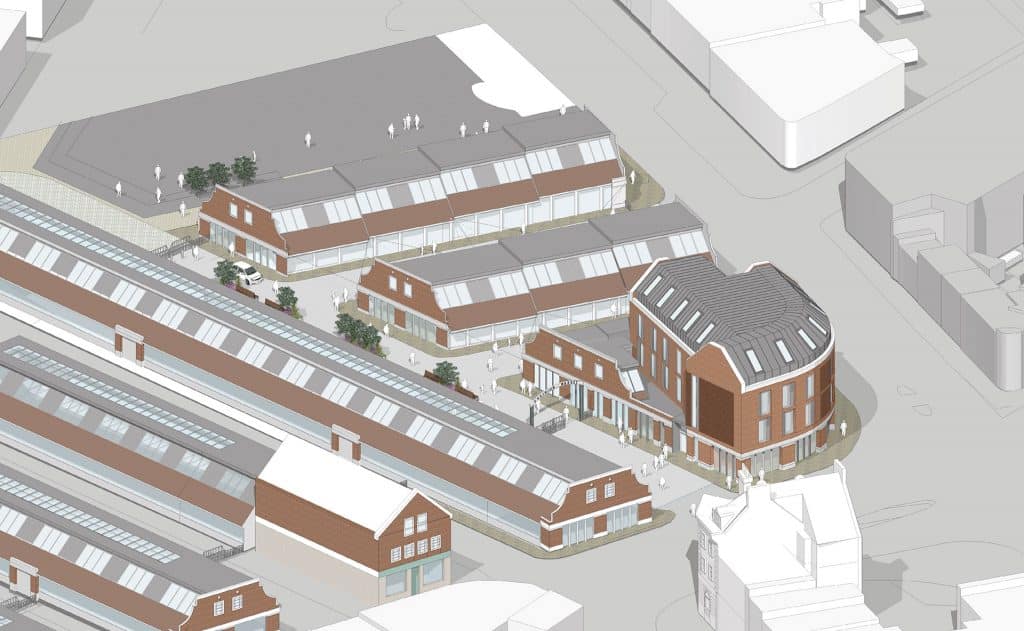 The initial plans, which are subject to approval by Nottingham City Council, show an exciting retail space, improved stalls for street food, and structures for pop-up shops. The redevelopment focuses specifically on three individual buildings adjacent to Sneinton Market which were not part of the 2014 refurbishment of the area.

A main feature of the scheme includes using the curved façade of Southwell Road to further develop the prominent three-storey building adjacent to the market. Improved signage to the entrance of Sneinton Market will also be introduced to emulate iconic markets that have thrived in other key towns and cities across the UK, for example Borough Market in London.

The overall offering is much more dynamic, aiming to attract more local businesses into the Creative Quarter and to provide places for the public to shop, eat and relax.

“As part of the wider redevelopment of Sneinton Market, our design concepts were inspired by a project we recently worked on in Copenhagen to bring the city’s heritage buildings to life. As one of Europe’s leading creative spaces, we’re bringing some Copenhagen thinking into Nottingham.

“The challenge was to remodel a part-built design, improve the planned scheme, and to redefine the development into a unique hub of residential, retail, and leisure space for the whole community to enjoy. Our designs draw upon the wider strengths of Nottingham’s Creative Quarter as a hub to attract more retailers – this redevelopment will further strengthen Sneinton Market as a lively place to shop, eat, drink and visit for many years to come.”

Sam Burt, director at Carlton Street Trading, which is the family-owned development company with the sole aim of regenerating Nottingham city centre and purchased the site from Nottingham City Council, said:

“This is an extremely exciting time for the city of Nottingham and in particular, the Creative Quarter. Sneinton Market has always possessed great potential and will now act as the catalyst for attracting some fantastic retailers into the space. As site developers, our aim has always been to make Sneinton Market a special place for the people of Nottingham and to attract more business into the area. We are looking forward to working with the new CEO of the Creative Quarter and I’m certain that Sneinton Market will flourish in this new age.”

“This could be an exciting addition to Sneinton Market and to Nottingham’s Creative Quarter. It would not be the final piece of the jigsaw but would go a long way towards making Sneinton Market a great destination, providing an even better food, retail and leisure experience in an increasingly lively part of the city. It’s another reason for people to come to Nottingham to learn, live, work and invest as the Creative Quarter plays a bigger role in Nottingham’s story. The part of Sneinton Market this development tackles could be a perfect fit for smaller, quality, independent and brand retailers looking to share in Nottingham’s success.”

“The design of the market will attract new and unique retailers & leisure operator’s into the space – that’s the ultimate objective as more operators will increase footfall and Sneinton will become part of the City Centre. It’s an absolute pleasure to work with Leonard Design Architects on this project as they’ve been able to bring their international experience and diverse approach to transform the area. At Box Property Consultants, we share a similar vision and we’re pleased to be involved in the development of such a vibrant area of the city.”

Frankie Labbate, Co-director at Box added “Sneinton Market is becoming the next “cool”, Hockley is thriving and this is the next logical area for the City to push into. We are already talking to a number of exciting brands that will really put Sneinton on the map.”

The Creative Quarter was established as a company in 2013 to lead the development of Nottingham’s Creative Quarter area which is made up by Sneinton Market, Hockley, the historic Lace Market, Pennyfoot Street and also includes BioCity, the UK’s largest bioscience incubation centre.

The redevelopment of Sneinton Market forms part of a broader programme of regeneration activity to Build a Better Nottingham, which also includes work to improve the public realm in the Creative Quarter, more than £750m worth of investment in transport infrastructure across Nottingham, and the biggest council home building programme in the city for 40 years with more than 400 new council homes being built across the city.