Some of the projects that have brought me the most satisfaction and enjoyment in recent years have been those with creativity at their heart. It’s behind some of the most innovative thinking on how to revitalise areas in desperate need of urban regeneration, both in UK towns and cities and abroad.

An infectious type of enthusiasm and community spirit underlies the power of urban regeneration schemes and after seeing evidence that they work, I can safely say that the Leonard Design team understands their importance for breathing life back into our towns and cities. We’ve seen it across a number of projects such as in Nottingham, Sheffield, and Oslo.

I see urban regeneration and development, with a focus on creative industries, not only as a progressive way of working, living, and doing business but as a way of taking the ideals of the traditional marketplace and using them to regenerate urban areas.

Creative Quarters celebrate and capitalise upon everything that was always great about a local market. Such as entertainment, the chance to barter, deal directly and build a relationship with a seller who is also often the maker or producer, and socialise, all in one place. This was the foundation of our towns and cities and – I believe – through Creative Quarters, will be again.

A creative attitude to urban regeneration

At its core, a successful Creative Quarter needs to have a positive and collaborative attitude. People want authenticity above anything else; whether that’s an authentic product or experience. This belief and shared mind-set are what create an overriding sense of enthusiasm and an inspirational space for people to enjoy.

Creative Quarters are hot-beds for new ideas to be tried and tested; the master planning and architecture needs to take a similarly innovative approach. We’ve seen how true this is on a large scale at Bispevika, Oslo where a whole new area for the city is being created.

Situated next to Oslo Opera House, a new Edvard Munch gallery and museum, hotels and a transport hub. Bispevika will eventually offer 170,000 sq.m office space, 1,900 homes, and 29,000 sq.m of active ground floor space. It’s a model of how we are going to live and travel in the future, but one that’s becoming a reality now in Oslo.

Bispevika is a Creative Quarter on a mass scale. With boutique shops, food halls, markets, galleries, maker units, cookery schools, and co-working spaces based around public realm that bring people together. Meanwhile the business and residential spaces have been designed with an active ground floor plan to sustain a sense of buzz and atmosphere.

Collaboration is key to this urban regeneration project. We have designed the master plan for the entire scheme and therefore had the privilege of working with a raft of top Scandinavian architecture firms, such as A-Lab, to ensure cohesion and continuity across the development.

Creative Quarters are a heady mix of positive architectural, public, and commercial elements. Fortunately, this country has an abundance of existing buildings in need of redevelopment. Restored buildings benefit from a real sense of history and personality. This is then of benefit to businesses that need to attract a passing trade by standing out and offering consumers something quirky or unique.

These schemes often suit university cities looking to revitalise or revive certain areas. After all, educational institutions are also looking to nurture future entrepreneurs to help them turn their skills into a business. Creative Quarters can themselves be learning environments through mentorships and knowledge sharing with those that have already turned a concept into a fully-fledged career. 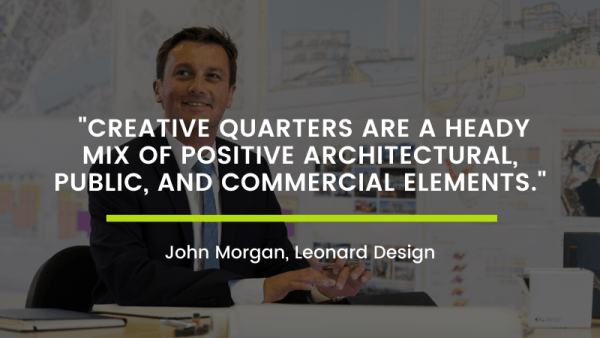 Green spaces and the public realm are vital. Drawing people to an attractive outdoor space is one of the simplest ways of creating that sense of atmosphere and a hive of activity that draws others in. One of the most critical parts of our role as an architect is to help determine how people will engage with a location and, through good design, encourage the right mix of tenants.

Part of the process of creating this feeling of ‘place’ through public green spaces is as simple as exploiting sunny locations and creating a calendar of events. Nottingham’s Sneinton Market, which is part of its established and successful Creative Quarter, already does this well.

Its public realm is not only used by the visitors thanks to its growing number of cafes, pubs, and microbreweries, but for various markets, outdoor theatres events, screening of major sporting events, and other temporary workshops or family events. It also sits next to the renovated Victoria Baths leisure centre so benefits from passing foot traffic.

Sneinton Market is bursting with creative businesses and, with support from private and public sector collaboration, a strong sense of community has been created. We’ve worked closely with Nottingham City Council and Invest in Nottingham on the continued regeneration of this site and so far it has been hugely successful in filling its units with independent and local tenants. The area has also developed a growing community of repeat visitors who enjoy the mix of things on offer as well as the sense of authenticity.

For us, the project is about creating the right environment for businesses to flourish and provide a point of difference with other areas in the city. Rather than competing with the neighbouring areas of the Lace Market and Hockley, it extends its cool and independent spirit further and to become a hot-bed of entrepreneurship.

I’ve noticed that on many of the urban regeneration schemes we’re working on, the resulting creative and cultural communities have a positive knock-on effect to the wider towns or cities. I refer to this as a “halo effect”.

For instance, the Heart of the City Part II scheme in Sheffield must similarly feed off the strengths of the surrounding city and the existing heritage of its buildings, whilst maximising the green space available in an otherwise urban environment. 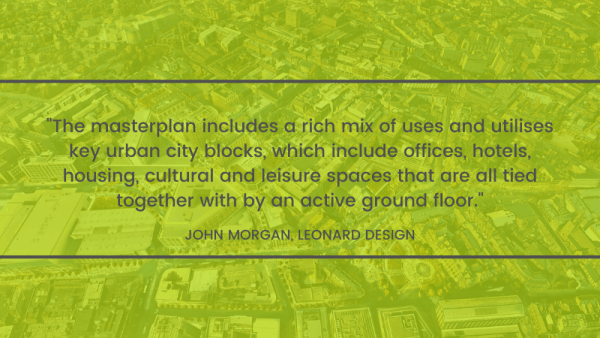 There have been a number key players involved in this scheme, all expertly led by Sheffield City Council and its vision for how the city could look and feel. The masterplan includes a rich mix of uses and utilises key urban city blocks. This includes offices, hotels, housing, cultural and leisure spaces that are all tied together with by an active ground floor.

Grosvenor House in Sheffield, Heart of the City II

The first project to kickstart the vision was Grosvenor House. We took an asbestos ridden, concrete hotel in centre of the site and transformed this into the new office space for anchor tenant HSBC. As a result of this work, the surrounding environment is developing a strong local vibrancy, creative neighbourhoods and an attractive public realm in order to create an appealing destination.

This supports the new standards of work/life balance that employers want to offer. It’s about how people want to enjoy their lunch time and their working environment as part of the day to day experience of being at work. This is particularly valued by growing tech companies who were amongst the first to redefine the idea of productivity and the boundaries of a traditional work environment.

By bringing people to the city, the retail then followed and was marked by the opening of Monki and Weekday in November. Two of the coolest retailers on the planet chose Sheffield and this part of the city thanks to the successful master plan and place making.

Creating a relationship between brand and customer

I have recently been introduced to ‘Bishy Road’ in York – short for Bishopthorpe Road, it is a street full of independent shops, cafes and businesses. In 2010 the business owners formed a Traders Association and the work this group has done is truly inspirational. When Johnny Hayes, founder of Indie York, presented his story and the narrative of Bishy Road, I was incredibly moved.

When was the last time you felt an emotional attachment to a retailer or brand? It made me want to visit the street and its fantastic stores just so I can experience some of the magic Johnny was talking about… and post that I was there as well!

The traditional British marketplace was formerly a place to buy and sell goods, as well as socialise and connect with the community. These ideals are being applied in order to restore the vibrancy of UK towns and cities.

I’ve seen this realised not only in terms of the creative businesses choosing to invest in a new location, but in how creativity is instilled and realised in every part of a scheme. Even down to pub events such as one I saw recently called “PHD and a Pint” where you get the chance to talk about your chosen area of expertise with a stranger!

Maintaining these events programmes and activities is hard and takes work. However, you can’t run out of ideas, you must keep investing, inventing and communicating with the community.

Creativity combined with architecture and regeneration really has no boundaries and, in this sense, should be celebrated. That’s what we’re all about as a practice and we love nothing more than being part of how our towns and cities are being knitted together in this way.

John Morgan is a Director at Leonard Design Architects and has extensive experience delivering some of the most prestigious retail regeneration projects in the UK and Europe.

Leonard Design has since grown into an award-winning urban design, architectural and interiors practice with offices in Nottingham, London, Berlin, Kuala Lumpur and Sydney, Australia. Get in touch with John by calling our Nottingham office on 0115 945 0080.