A Nottingham developer who pledged to transform the fortunes of Bridlesmith Gate, has begun working with local organisations to bring a colourful taste of Copenhagen to the city centre.

Arran Bailey, the managing director of ALB Group was so disheartened at the demise of his home city, that he began buying a raft of retail units with the vision of creating a hub of independent shops, bars and cafes in the once bustling, Bridlesmith Gate area of the city.

After achieving his initial aims and filling most of the units, he has now enlisted the help of local youngsters, Leonard Design Architects, The Nottingham Project, Marketing Nottingham, Nottingham BID and Nottingham City Council to inject some colour into the area. 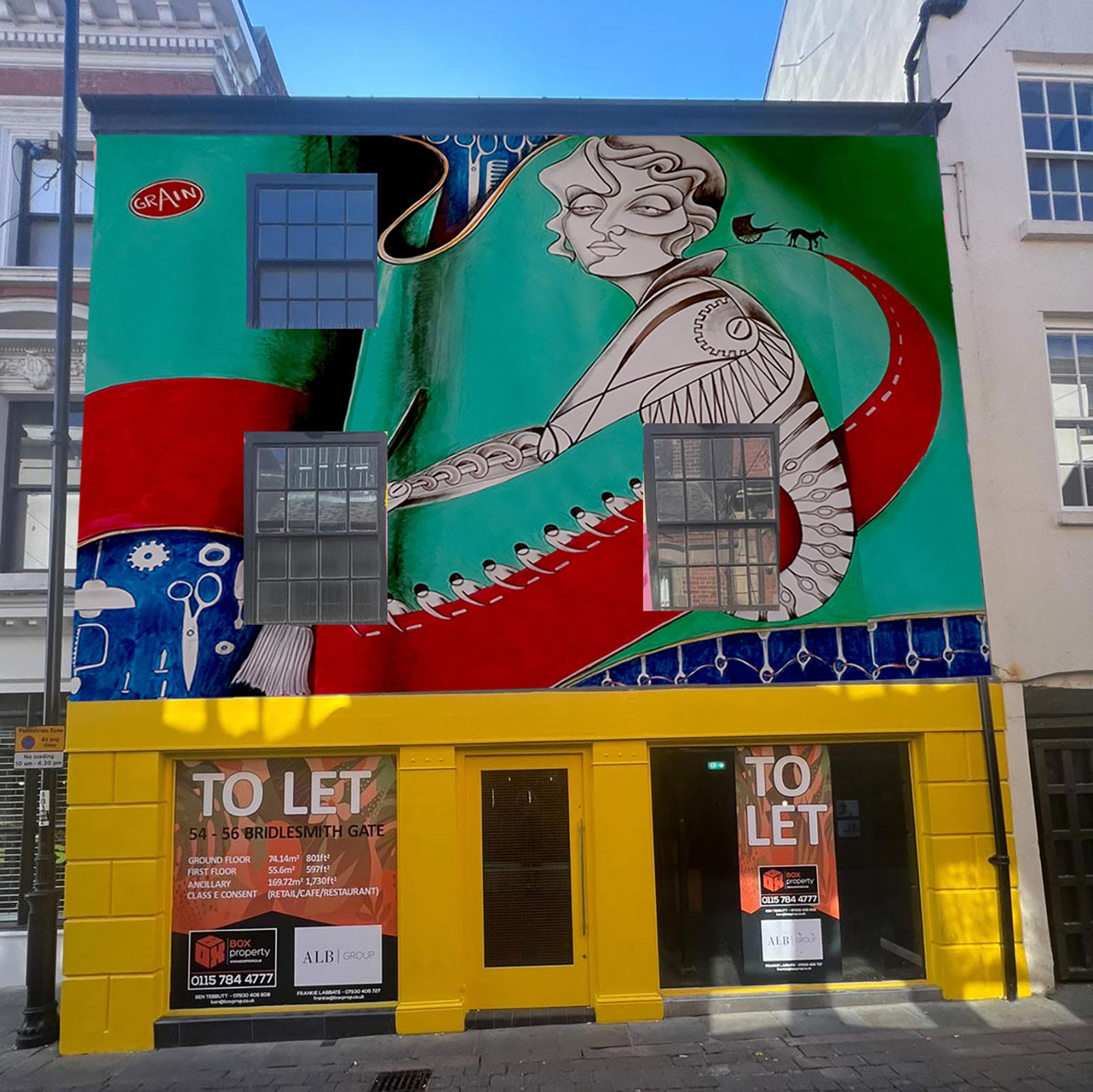 The team at Leonard Design Architects and Marketing Nottingham visited Nottingham College some six months ago and asked students what they felt about Nottingham, what stopped them from visiting the city and how it could be improved- and the feedback was brutal with some saying that Nottingham was ‘bland’ in comparison to other cities.

Arran Bailey, managing director at ALB Group, said: “We want to make this area cool again – bring a vibrancy back that Nottingham was once known for. After visiting students at Nottingham College, we knew that offering lower rents, and shorter contracts was just the first step in a wider plan.  I was shown some concepts by John Morgan at Leonard Design Architects, his designs blew me away, and I knew this would be amazing for Nottingham. We hope that this project will provide a model for other cities.”

John Morgan at Leonard Design Architects, who attended the workshop and who has previously been involved in projects such as Bispevikia in Oslo and The Jam Factory in Melbourne, Australia , said: “The students explained to us that they had travelled the world, been to bright colourful cities like Copenhagen and Berlin- and that Nottingham was vanilla in comparison.

“It made for difficult listening, and as much as I love our city, you must admit that they do have a point. Many of the shops and buildings in the city centre- and on Bridlesmith Gate in particular, are cream and white or grey, there is no colour, and no personality.  Shops had been closing down before Arran created a new strategy, and we need to get people engaging with our city centres and high street again.

“Following the feedback, Arran’s team and the team at Leonard Design created a wider more colourful vision for this area of the city, and we received so much support from Marketing Nottingham, Invest in Nottingham, The Nottingham Bid and Nottingham City Council who helped us to secure some funding. The project will see the buildings on Bridlesmith Gate painted in bright murals, previously closed areas of the street opened up once more, bright artistic installations on every corner, and even a few surprises- making the street a destination – and extremely instagrammable.” 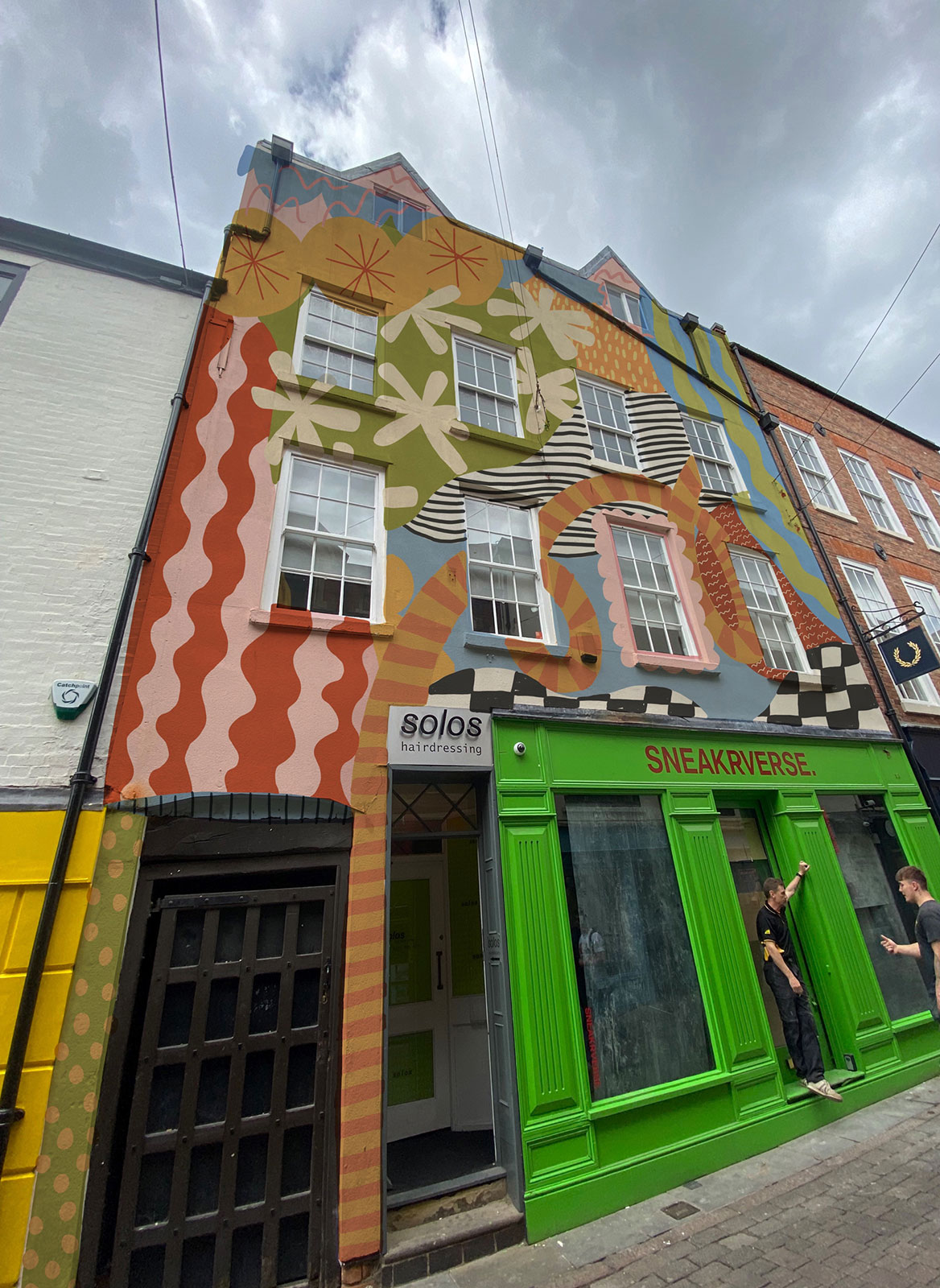 The team behind the project then approached Nottingham BID and The Nottingham Project to help commission some amazing artists to bring the vision to life.  Nottingham based Carousel, which is a community of artists, freelancers and small businesses, leapt into action, and the works began earlier this week.
Lee Walker, director at The Nottingham Project said: ““These murals will be stunning examples of how culture and creativity can be used to help with the rejuvenation of one of Nottingham’s most famous streets and add to an ever growing collection of works across the city that tell our story whilst providing real opportunities for Nottingham’s creative community”

Benjamin Kay, the project coordinator, said: “There will be five murals to celebrate the cultural legacy of Bridlesmith Gate, explore its diverse history and bring a vibrant and fresh new look to the area.

Through unique pieces, the street will be transformed into a walkable timeline. Each mural is an interpretation by the local artists which capture moments of time and stories from the past. Embark on a visual journey that starts 100 years ago and continues into our city’s cultural future.”

Martin Rayment from The Carousel is operations director on the project, he said: “This is a really great example of Philanthropy from a private landlord, and it fits well with The Carousel’s ethos of making creative things happen.  The mural began this week, and it has started really well.”

Robert Dixon, Head of Business Growth and CEO at Marketing Nottingham, said: “I have been involved in trying to rejuvenate Bridlesmith Gate for many months and years. Following the research with students at Nottingham College. We hosted a group of city centre stakeholders on a walkabout a few months ago – and John Morgan and the team from Leonard design shared the concept of what was being planned – this got tremendously positive feedback and hopefully spurred on the owners to move ahead.

It is great to see Bridlesmith Gate transform – with new shops, different types of shops (café, vintage clothing etc) and now to start to see a more vibrant colourful street design coming to life. With bright colourful shop fronts, and innovative funky designs on some buildings, Bridlesmith Gate is again one of the must-see locations in the city. 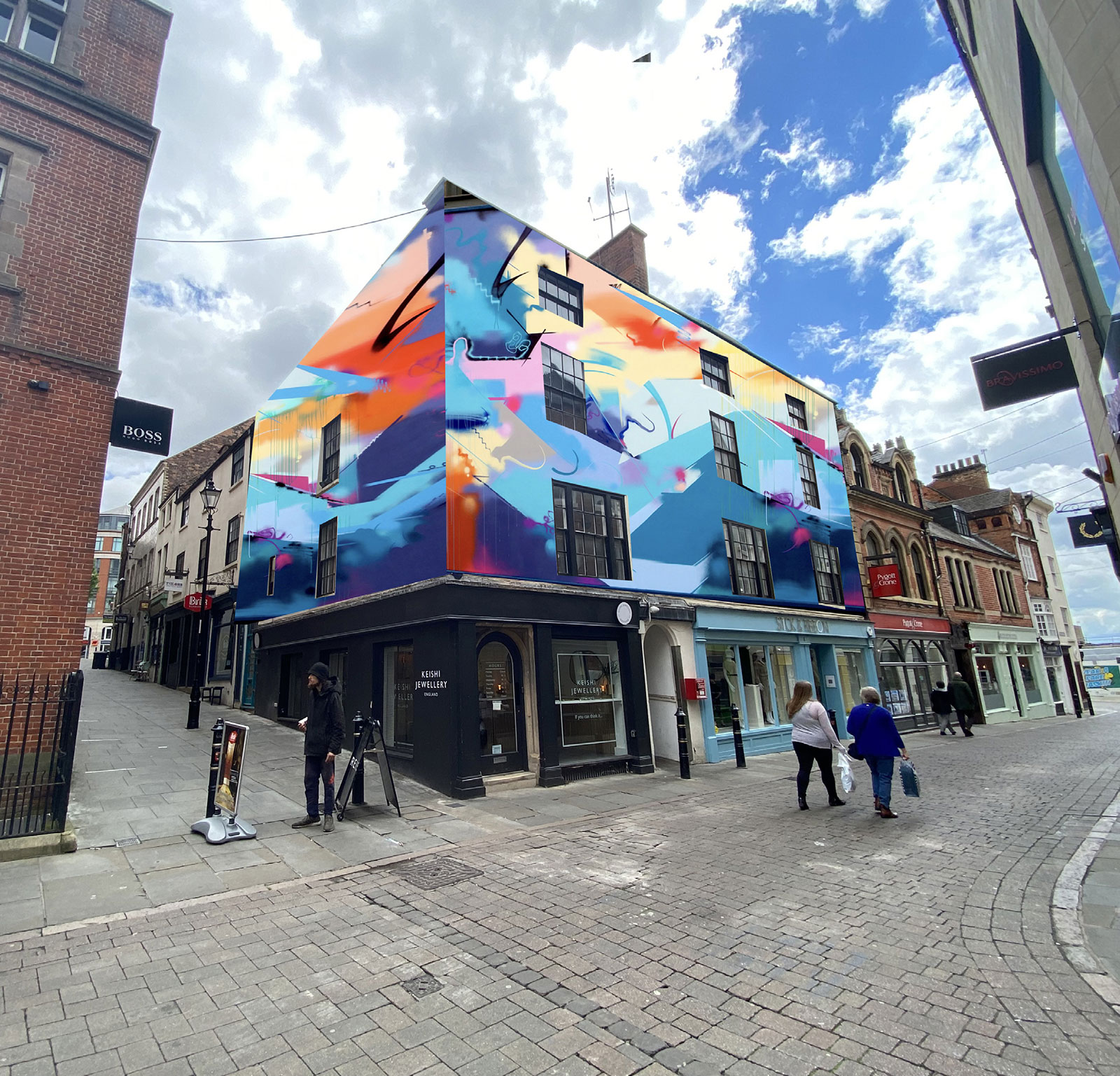 Alex Flint, CEO of Nottingham Business Improvement District (BID) – the city centre business alliance who are providing funding for the installation of the murals, said: “Commissioned street art is increasingly seen by cities as a significant visitor attraction, and a valuable asset to local communities. We are therefore delighted to be supporting local artists to create these vibrant, large-scale artworks, which will enhance the historic Bridlesmith Gate area for years to come.

“The project is an example of Nottingham BID’s continuing investment to provide bigger and better things for Nottingham city centre, through partnership working. Projects like this are a powerful way to create pride and excitement in the city, and further raise Nottingham’s profile as a destination city.”