Can architects combine logic and creativity to inspire the next generation of designers?

Creativity and logic are often considered to be two opposing skills, one full of imagination and originality and the other bound by reason and rationality.

In reality, the two complement each other. Architecture has always blurred the boundaries between art and science, and now with the advancement of technology the two are becoming more and more entwined. Logic can be used to define a set of flexible parameters and establish a framework within which creativity is able to flourish and be fully explored with a rigour and speed that wasn’t previously viable.

Parametric scripting is the creation of a digital model based on a series of programmed rules. The process allows for seemingly complex shapes and geometries to be understandable, controllable and buildable.

Our first fully parametric project was one we had full control over – the staircase in our Nottingham HQ.

Designing a staircase with parametric scripting

In 2016 we decided to expand and take on another floor in the building. This set a simple challenge for us, as for years we had kept the team together to limit alienation and encourage team working and we didn’t want this to change. Therefore, a seamless connection between the floors was essential and the idea of an internal flight of steps was born. 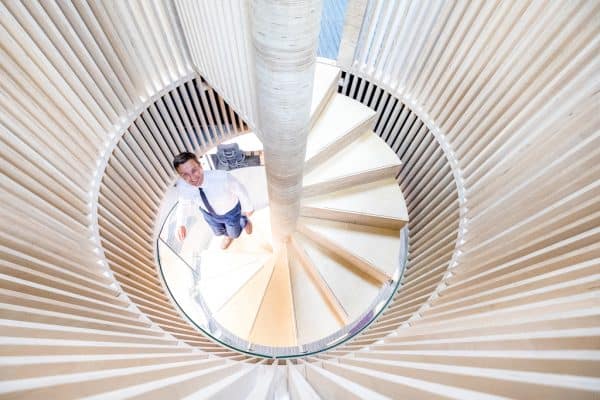 The staircase at our Nottingham HQ

We wanted something that the design team could ‘own’ so we worked up a number of ideas, eventually landing with the flat pack staircase, a kind of 3D jigsaw puzzle. The 600-piece spiral staircase was designed by the team and is the culmination of more than a year of design, prototyping, manufacture and installation. The stairs connect the two floors of the office, providing easy access as well as an eye-catching feature made primarily from a series of standard plywood sheets.

By using parametric scripting software, the team was able to optimise the stair parameters (weight and dimensions) and add automation into the process. The accurate 3D model was then used to generate the fabrication drawings, with a local CNC company producing the main stair components.

The installation process was really interesting, as labelling and assembling 600 pieces is no mean feat. We were also surprised just how much the plywood – often assumed to be a relatively stable product – actually shrank. We therefore had to design each step to be oversized, dry assemble it in situ, and then wait a few weeks for it to shrink down to the right size, prior to final assembly. 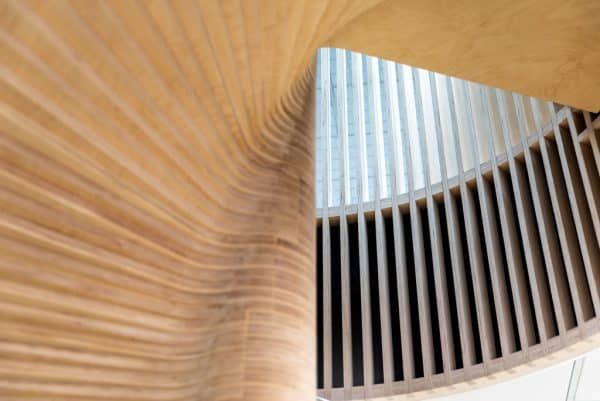 The plywood components of the spiral staircase

Feeling confident following the success of our Nottingham staircase, we set about looking for another design challenge.

The pavilion project with Arup

We teamed up with Arup’s Nottingham office to create the Social Shell pavilion. The project – in conjunction with Nottingham Trent University (NTU) and Scale Rule – started with a weekend workshop for a number of local students.

Held in the summer of 2018 at the NTU city campus, the weekend saw a number of interactive exercises including design, drawing, and model making, with an emphasis on teamwork. We briefed the students and they set about their task of designing a pavilion for the heart of Nottingham. 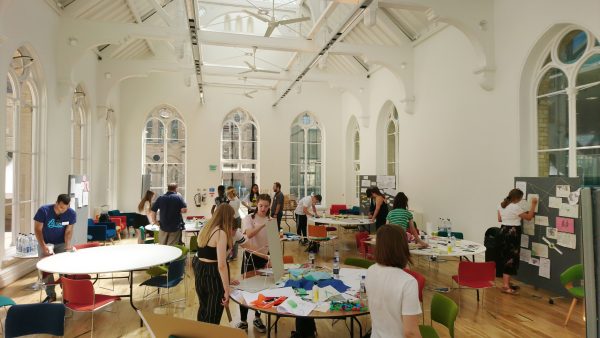 Inspiring the next generation is at the heart of all Scale Rule projects. As a social enterprise, it aims to benefit young people interested in the built environment but also promotes diversity and better representation within the industry.

The purpose of the weekend was to inspire young students to think about the world of engineering and architecture as a potential future career. After all, they are the next generation of designers.

After a full weekend of workshops and a panel event, the winning design was chosen. Named the ‘Social Shell’ and designed by two students from two local schools, the proposal was influenced by the flow and movement of the River Trent. 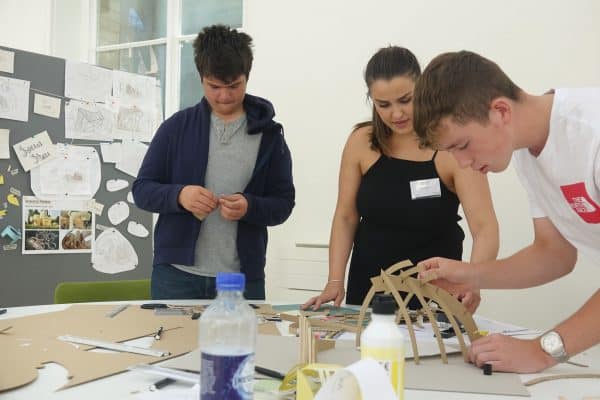 Local students creating a small-scale prototype of the ‘Social Shell’

By using parametric modelling, we were able to quantify how much timber would be required to build the pavilion. We quickly realised that we’d need to reduce the overall size in order to keep within budget. A time-consuming process by standard modelling methods, we were able to make the changes quickly, and Arup were then able to feed in further efficiencies to the structure, enhancing the slenderness; a key contributor to of the pavilion’s appealing look and feel.

Using parametric software, we designed the ‘fins’, ‘ribs’ and ‘spine’ of the pavilion. These all slot into each other, making it easy to manufacture and build. By using the parametric scripting software, we were able to approach the project in an intelligent and detailed way, layering on more and more information into the design, even down to placing all the notches to house the twine that bind the pieces together.

With each design tweak and iteration, the model and details adapted and updated automatically. 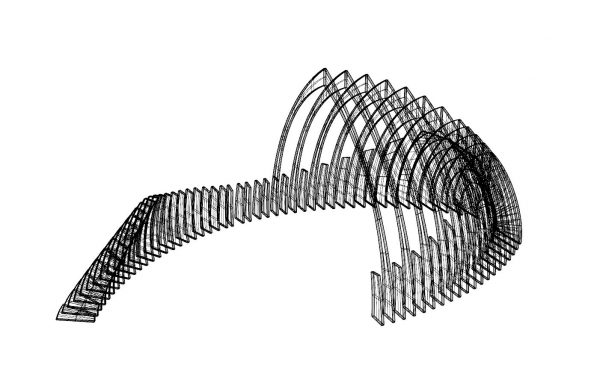 A digital design of the ‘Social Shell’ pavilion

We also used a 3D printer to explore each part of the structure – the spine, ribs and fins – and test-built scale models to ensure tolerances were correct and the joint details fitted together.

We pride ourselves on our designs not only looking good but being viable as well. This project really tested that theory as we were not only designing the structure but also building it ourselves, with a build window of only one day. We therefore had to know the design inside out and ensure that every small detail had been captured in the design and tested prior to the pieces arriving on site.

After working closely with the Arup team, the designs then went off to Quad – the same CNC team that built our staircase – to be manufactured. We gathered everyone who took part in the project to assemble the Social Shell pavilion in Nottingham’s Old Market Square.

Using parametric scripting and 3D printing was key to the success of the pavilion project and gave the team a chance to really test their capabilities using the software. It has now become an integral part of our design process across many other projects.

The pavilion project was a fantastic experience and working on a not-for-profit project with Arup – a company we often work with on big budget developments – was fantastic. We’ve created a video which really brings this project to life and is well worth a watch.

The Social Shell spent the summer in the Old Market Square, Nottingham, and will be featuring at the upcoming Timber Expo at the NEC, Birmingham for the duration of UK Construction Week. It will then be adopted by Nottingham City Council and be on permanent display at Lakeside Arts Centre, Nottingham to continue to provide an impromptu meeting place for social interaction.

To find out more about our other projects then please visit https://leonard.design/projects/ and you can also follow us on Twitter @leonard_design to keep up to date with our latest news.

Previous Company Away Day: LDA on Tor
Next Berlin Named as our Fifth Location